Should sneakerheads — and investors — be worried? 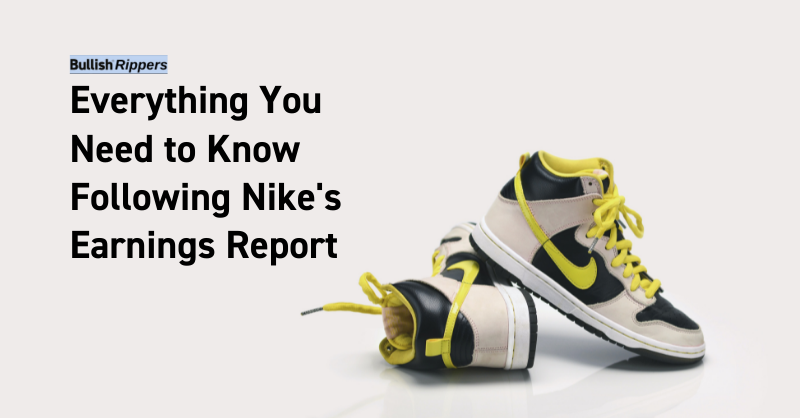 Nike ($NKE) reported earnings yesterday after the market close. This week, we're giving you a breakdown of everything you need to know following that report. Keep scrolling for more on:

Nike released its earnings press release yesterday at 4:15PM EST, sending the stock down by about 2% just five minutes later.

Nike’s headline numbers were up year-over-year with earnings-per-share (EPS) up 22% ($0.97) and revenue up 16% ($12.2 billion). This was Nike’s highest quarterly EPS in its history and the second highest revenue number behind only the $12.3 billion they reported last quarter. 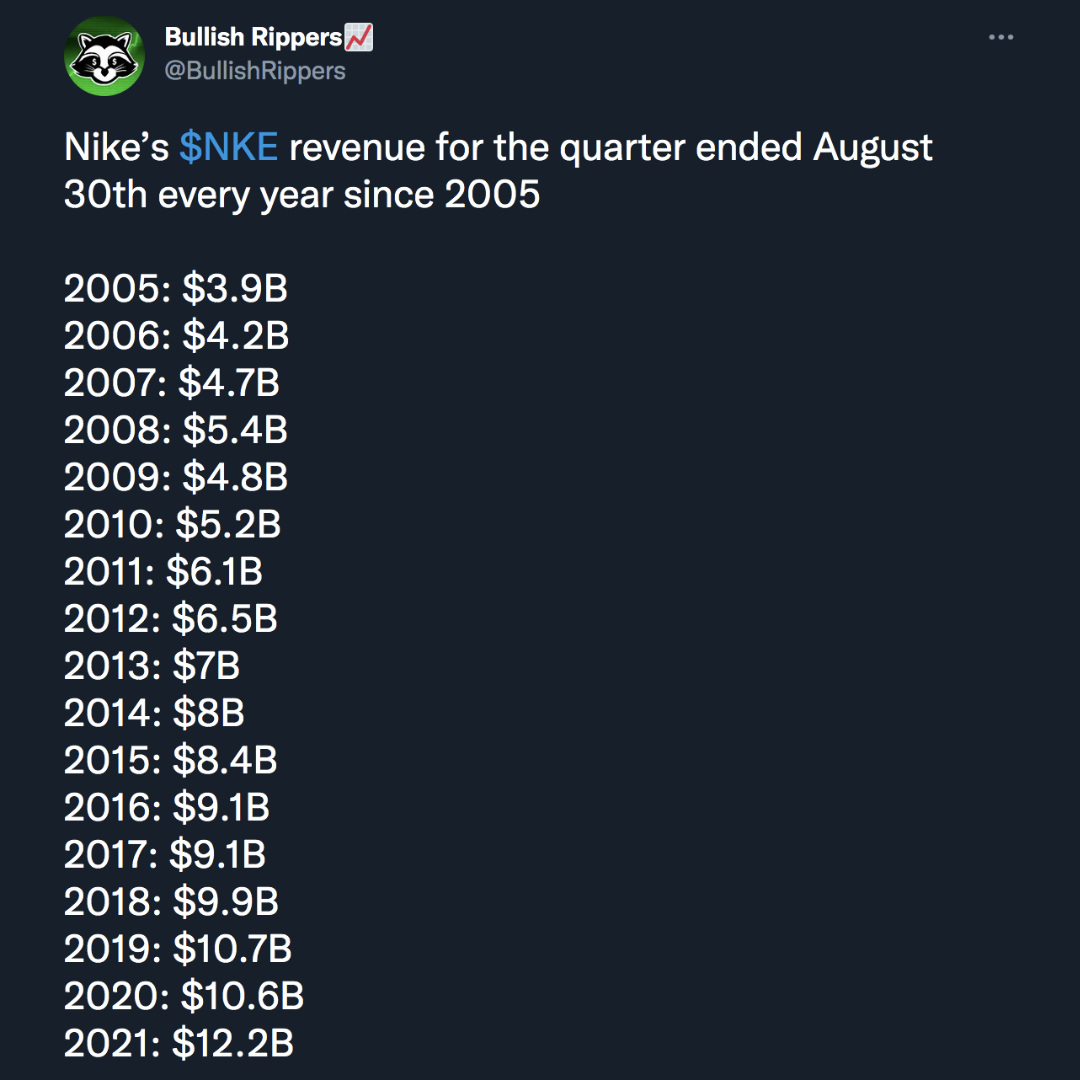 Nike has put a big focus on the direct to consumer part of its business — and it shows, Nike Direct numbers came in at $4.7 billion, up 25% year-over-year (YoY). Company-owned physical locations were a big part of this growth — up 24% YoY — now above pre-pandemic levels. Fueling this excitement was a strong summer of sports and a record setting back-to-school season. Going direct to the customer is great for margins, and this has helped Nike’s margins increase to 46.5% (up 1.7% YoY).

Another massive focus for Nike is their digital business. Even with in-store traffic returning close to pre-pandemic levels, they were still able to grow digital sales by 25% YoY. Sales from Nike Digital made up 21% of the total Nike Brand revenue from the quarter, up from 19% in the same period last year. Nike is looking to continue growing this part of their business, setting the goal of 40% of all Nike Brand revenues coming from its digital business by Fiscal Year 2025.

$NKE web sales are now 21% of total sales. Incredible for a brand which still depends on wholesale for 63% of its sales. In other words, nearly 57% of Nike Direct sales are online.

Demand was extremely strong for Nike, but the same can't be said about the current state of their supply chain. These struggles caused demand to outpace supply — meaning Nike left potential sales on the table. The two main problems currently affecting Nike’s supply chain include:

These are temporary disruptions, but how temporary is up for debate. Nike said it expects this dynamic to continue for the next year and hopefully start to work itself out heading into Fiscal 2023. The pandemic has been around for far longer than originally anticipated, and there’s no reason to think it can’t continue.

📊 Nike by the Numbers

By Business: Nike and Jordan brand made up the majority of revenue, bringing in $11.6 billion. Meanwhile, the Converse brand brought in $629 million — up 7% YoY.

By Region: All the regions were negatively impacted by supply chain issues. 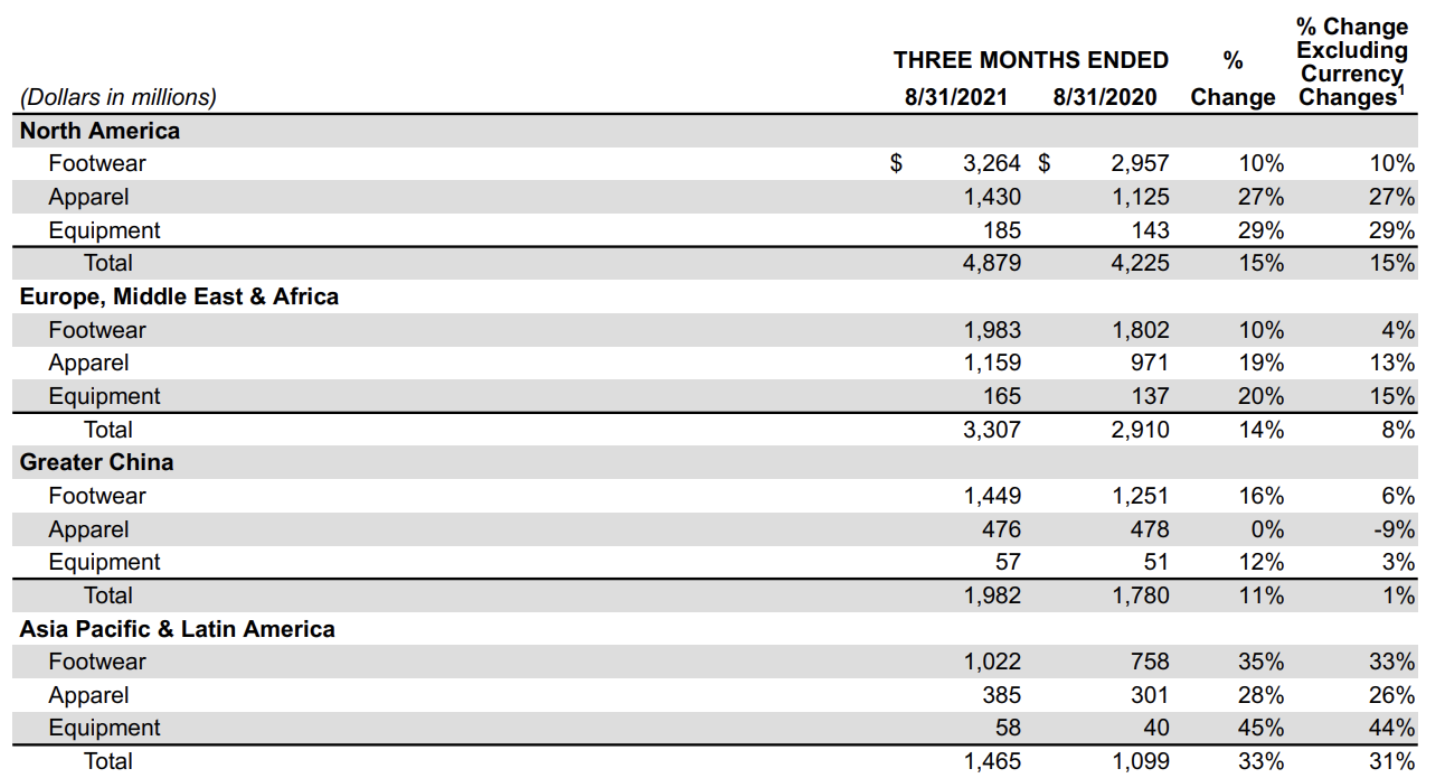 As a result of the aforementioned supply chain problems, Nike did revise down some of its future expectations and made a point while announcing the lowered expectations that it was “due solely to the supply chain impacts.”

For next quarter, Nike now expects:

Nike’s stock price was mounting a comeback up until this point of the call. The stock was down less than 1% in after-hours, then they talked about lowering guidance causing the stock to move to where it is at now — down 4% in after-hours trading.

Here's a fun fact for ya

So what should you take away from these earnings? First, demand for Nike products is stronger than ever. Nike is flexing their brand strength by increasingly going directly to the consumer, cutting out the middleman, and increasing margins. This is only possible due to the strength of their brands. Nike has positioned themselves, so this advantage wont fade. At the end of the day, Nike is still what’s cool!

The big glaring negative is the supply chain problems. This will cause issues going forward and will probably last longer than the company is currently expecting (who really knows though). Although these problems will subside overtime, Nike does run the risk of forcing customers to try other brands, which could cause them to never come back. In my opinion, having a supply problem is relatively better than having a demand problem. Nike should consider diversifying where its suppliers are from to mitigate problems like the ones they currently have in Vietnam.

Covid restrictions force some retailers to rethink Vietnam as a manufacturing hub
Prolonged shutdowns in Vietnam because of the Covid pandemic are becoming a bigger headache for retailers.
www.cnbc.com

Overall, Nike is a great company with top tier brands and solid growth. The stock was high coming into earnings, and once they lowered forward guidance it only had one direction to go — down.

I don’t own any Nike, but I do like them for the long term. With that in mind, I'm not running to get in right here. I think Nike has some consolidation ahead of them, along with a decent level of headline risk over the next little bit.

If you already hold Nike and are a long term investor, I’d still feel totally comfortable holding Nike through this noise I foresee over the next year or so.

And if you’re looking to start a new position or are a trader, I would wait for a pullback from current levels before I started to get in. It feels like Nike wants to fill in the gap from their earnings released June 24.

Watch for any negative headlines out of Vietnam as this is the type of thing that could cause a big move lower. And as always, no matter what you… don’t buy your entire position at once, dollar cost average in over time!