Everything You Need to Know About Coinbase's Q3 Earnings

No SHIB effect yet! 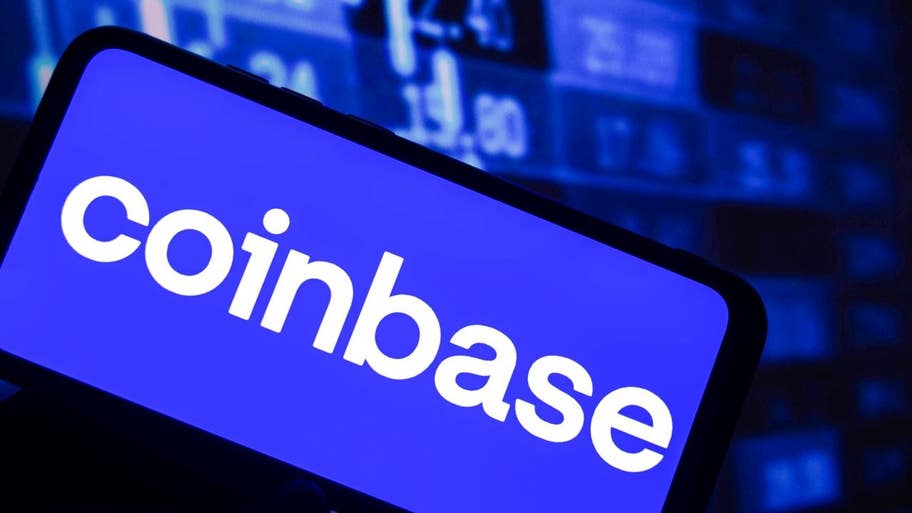 Coinbase released its Q3 earnings press release on Tuesday, November 9th at 4:00 p.m., sending the stock down by more than 10% after the report was released. 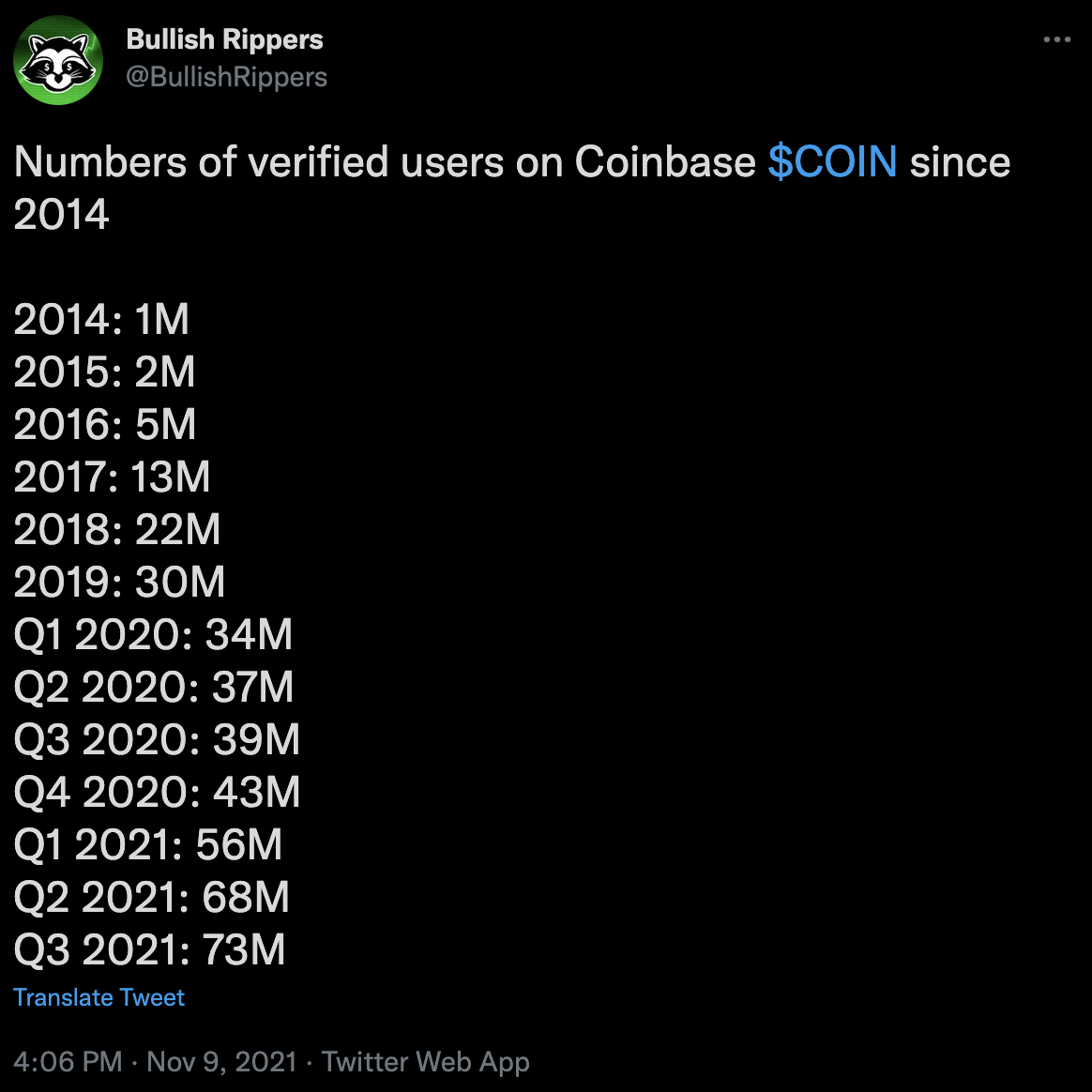 Volatility was definitely the main theme of the quarter. Coinbase called the crypto market entering Q3 “soft,” blaming it primarily on “low volatility and declining crypto asset prices.” Volatility in the price of crypto didn't fall off a cliff, but it was down meaningfully from Q2’s highs. There was a pick up toward the end of the quarter, but it wasn’t enough to get Coinbase’s numbers where they needed to be.

The effect volatility in the price of crypto has on Coinbase’s performance cannot be understated. The company is very consistent with this point. This quarter, they said “we have consistently indicated that volatility is a key factor influencing our transaction revenue. Q3 illustrates this point.”

Coinbase was quick to point to their outperformance versus the broader industry. Coinbase said the total industry saw a 37% drop in volumes last quarter, while Coinbase only saw a 29% drop during the same period.

They want you to take a longer term view point to see through this volatility. Coinbase said it’s “not a quarter-to-quarter investment, but rather a long-term investment in the growth of the crypto economy and our ability to serve users through our products and services.”

📊 Coinbase by the Numbers

Most of the key metrics for Coinbase followed the same pattern: Up huge from Q3 of 2020, but down meaningfully from last quarter. For example, Monthly transacting users are up 252% YoY but down 16% QoQ. 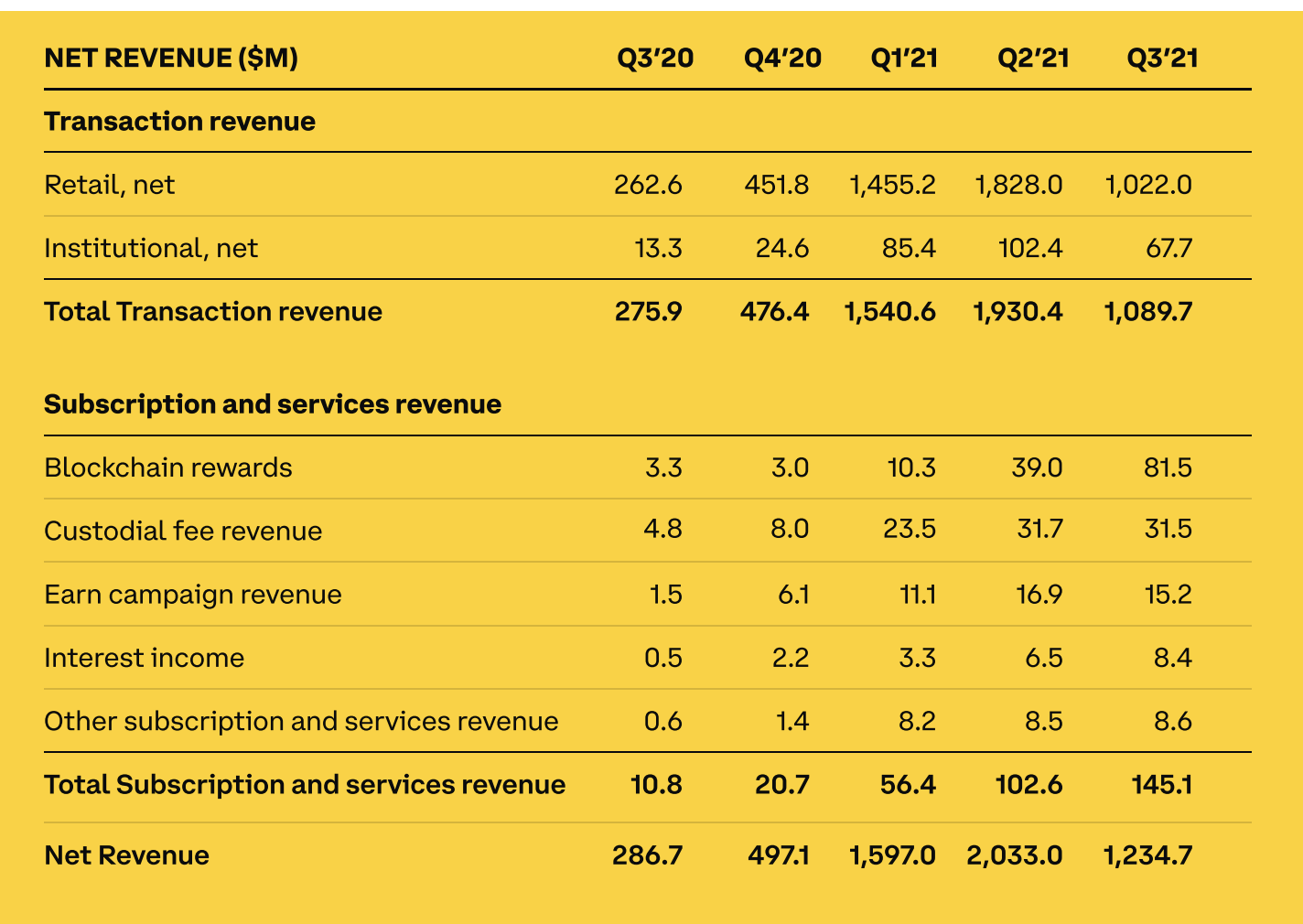 Coinbase’s total Q3 revenue was down 39% from Q2, but not all their segments were down. The Subscription and Services segment performed strongly, growing 41% from last quarter.

Almost all the growth for this segment came from the blockchain reward part, which predominantly gets its revenue from Staking. Coinbase attributed this strength to “ETH2, which now makes up the majority of our staked assets.” Approximately 28% of Coinbase’s retail clients both invested in crypto and engaged with one other product during the quarter so there is still plenty of room to grow in this segment. 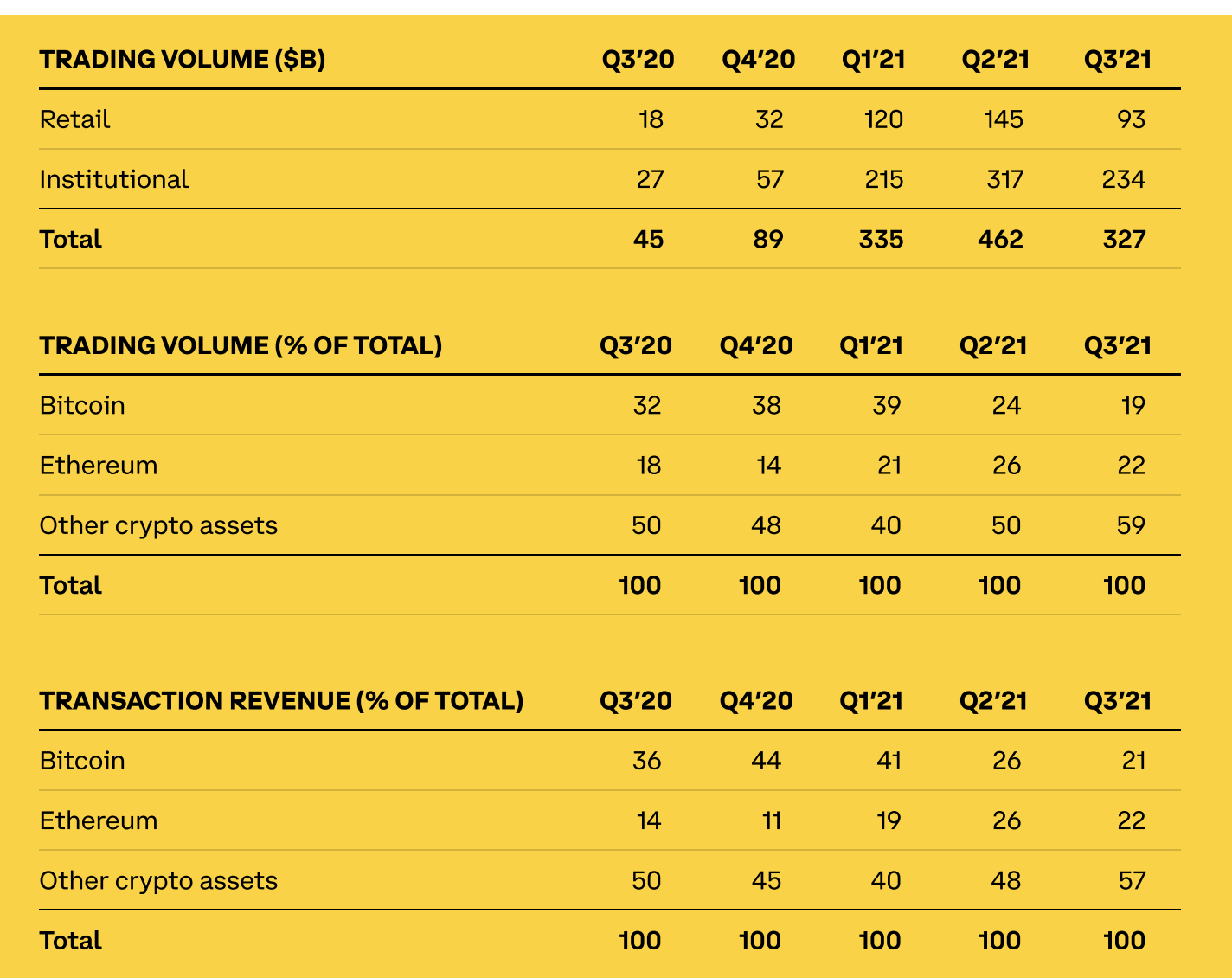 What stands out the most here is the percentage volume and revenue from other crypto assets. Seeing the move up of the “other crypto assets” category, I'm sure everyone's mind goes to one crypto in particular — SHIB. However, SHIB really only started to move in October after the end of Q3, meaning there was probably almost no effect from SHIB in these numbers. If I had to guess, I'd say the strength and volatility of Solana during the quarter was the main driver of this growth. 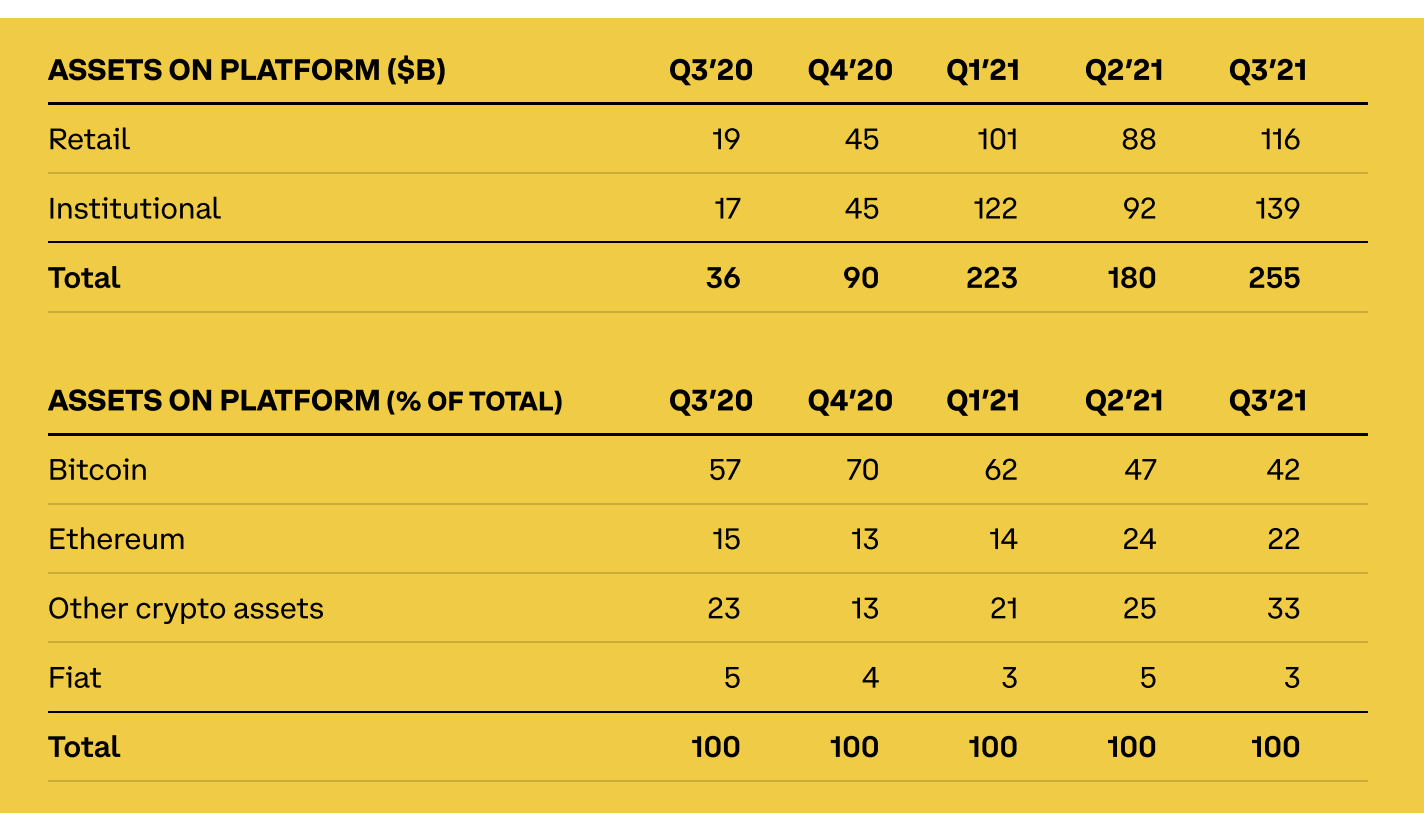 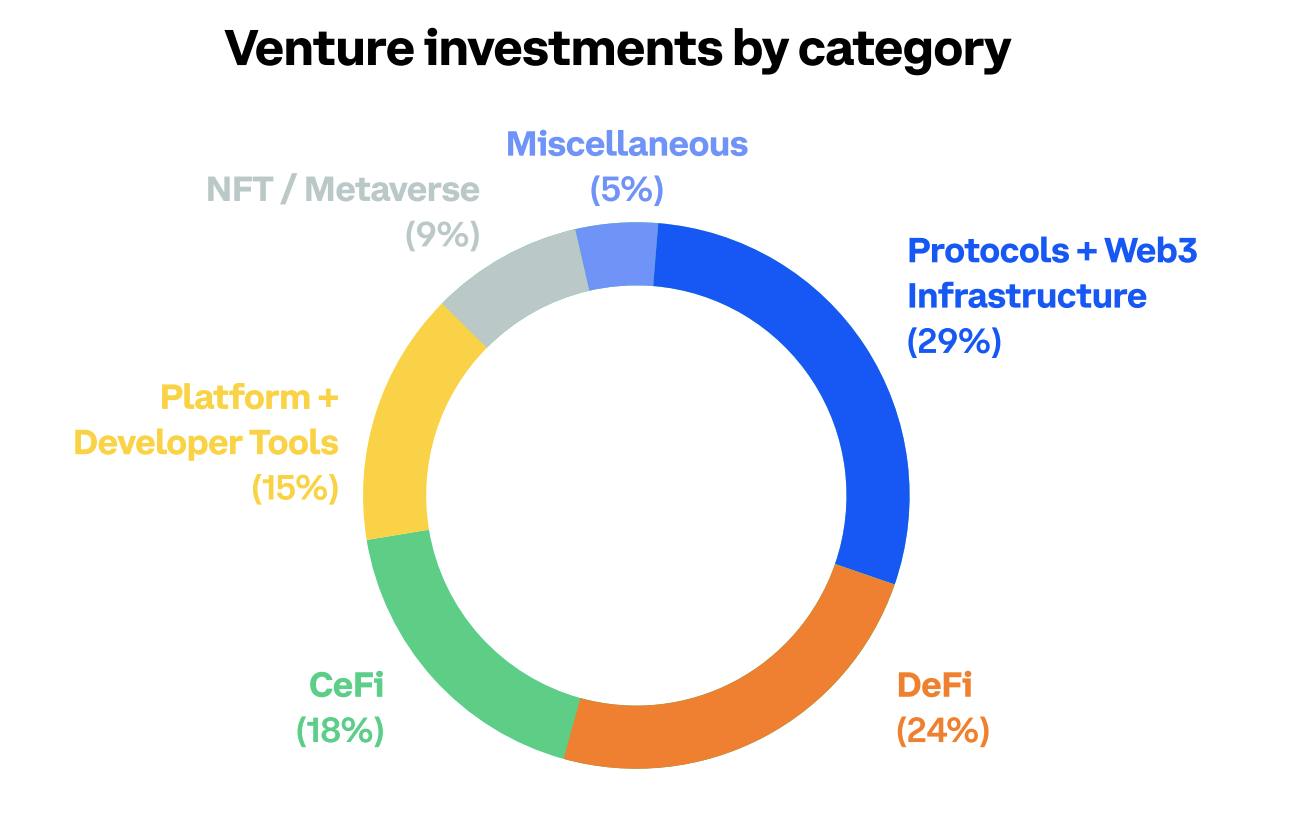 Coinbase didn't have too much concrete information to share about Coinbase Ventures, but there was an interesting tidbit from this section I had previously not known. Coinbase invested in the seed funding round for popular companies such as OpenSea, BlockFi, and Uniswap. Coinbase ended this part of the earnings call by saying they “look forward in the future to producing more disclosure and giving you more insights into this portfolio and may disclose fair market value at a future time.” … So basically don't hold your breath for any news in this segment.

Coinbase did give us a peek into how next quarter is going, with some numbers from October. Monthly Transacting Users (MTUs) came in at 11.7 million, and total trading volume was $186 billion. Comparing that to Q3’s numbers, you can see a clear pick up.

If these numbers were to continue, both would break previous quarterly highs of 8.8 million MTUs and $462 billion of trading volume in Q2. This has led to Coinbase saying they believe MTUs and trading volume will be higher in Q4 than Q3. 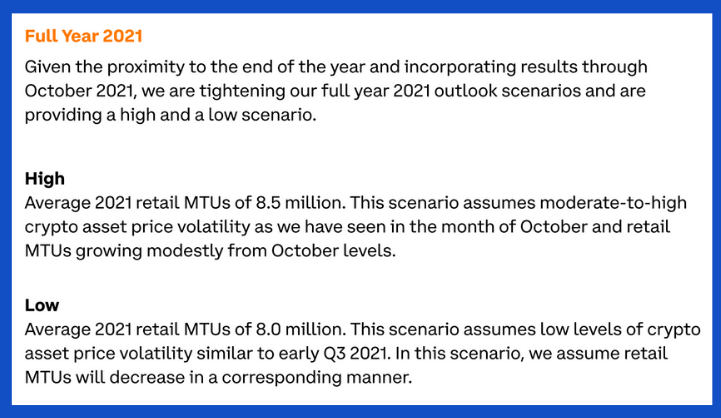 Coinbase stock has been on a tear recently, up more than 50% from its recent low on September 29th. I believe there is no coincidence Coinbase stock started to move higher right when the Shiba Inu craze really started to take off.

It's no secret SHIB has been a big deal for Coinbase. Coinbase became the most popular app on the Apple App Store during the month. Coinbase even change their advertisements and description to include SHIB.

So why does this all matter now? As mentioned earlier, all of this happened in October after the end of Q3. So what caused Coinbase’s stock to rise was not a part of the numbers we just saw. So, Coinbase giving that strong October performance was a big deal, and why we’re seeing them make a comeback today (as of November 10).

The way crypto has been moving, Coinbase is definitely still on track for a record quarter.  Coinbase is doing a better job at growing its more consistent subscription and services revenue, but transaction revenue is still what drives Coinbase. This means for the next couple of years, Coinbase will continue to move based on the price and volatility of crypto.

If you’re investing in Coinbase, you should keep an eye on the price of crypto and what coins are moving the most going forward. Bitcoin and Ethereum moving is good for Coinbase, but almost every exchange has those cryptos. The effect is spread out more across the industry. Something like SHIB running — which isn’t on that many exchanges — leads to an outsized effect on Coinbase. If any new alt coins gain immense popularity during the quarter, make sure to check if they’re on Coinbase and what other US exchanges they’re on.

That's all for Bullish Rippers this week! Let us know your thoughts, send a DM and make sure to stay up-to-date on all the stocks ripping and dipping over on our Twitter.

Want to hear more from us? Bullish Rippers co-hosts Twitter Spaces events with Stock Market News and Wolf Financial every Monday morning and Friday afternoon. You can tune in this Friday at 4 p.m. EST!

Stay bullish and we'll see you all in the next one 🔥