Everything You Need to Know About Netflix's Q3 Earnings 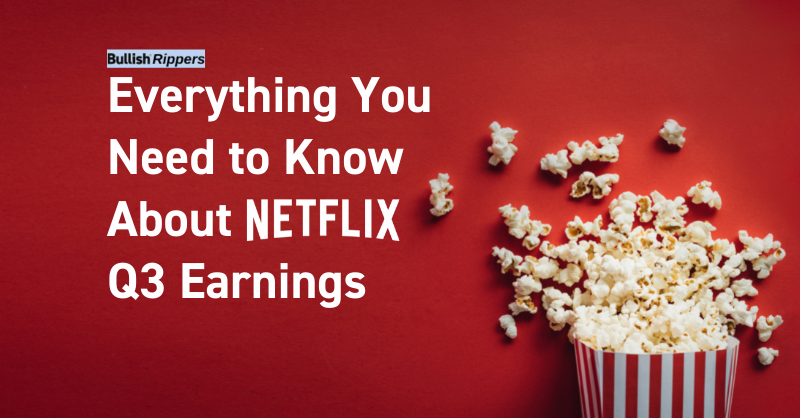 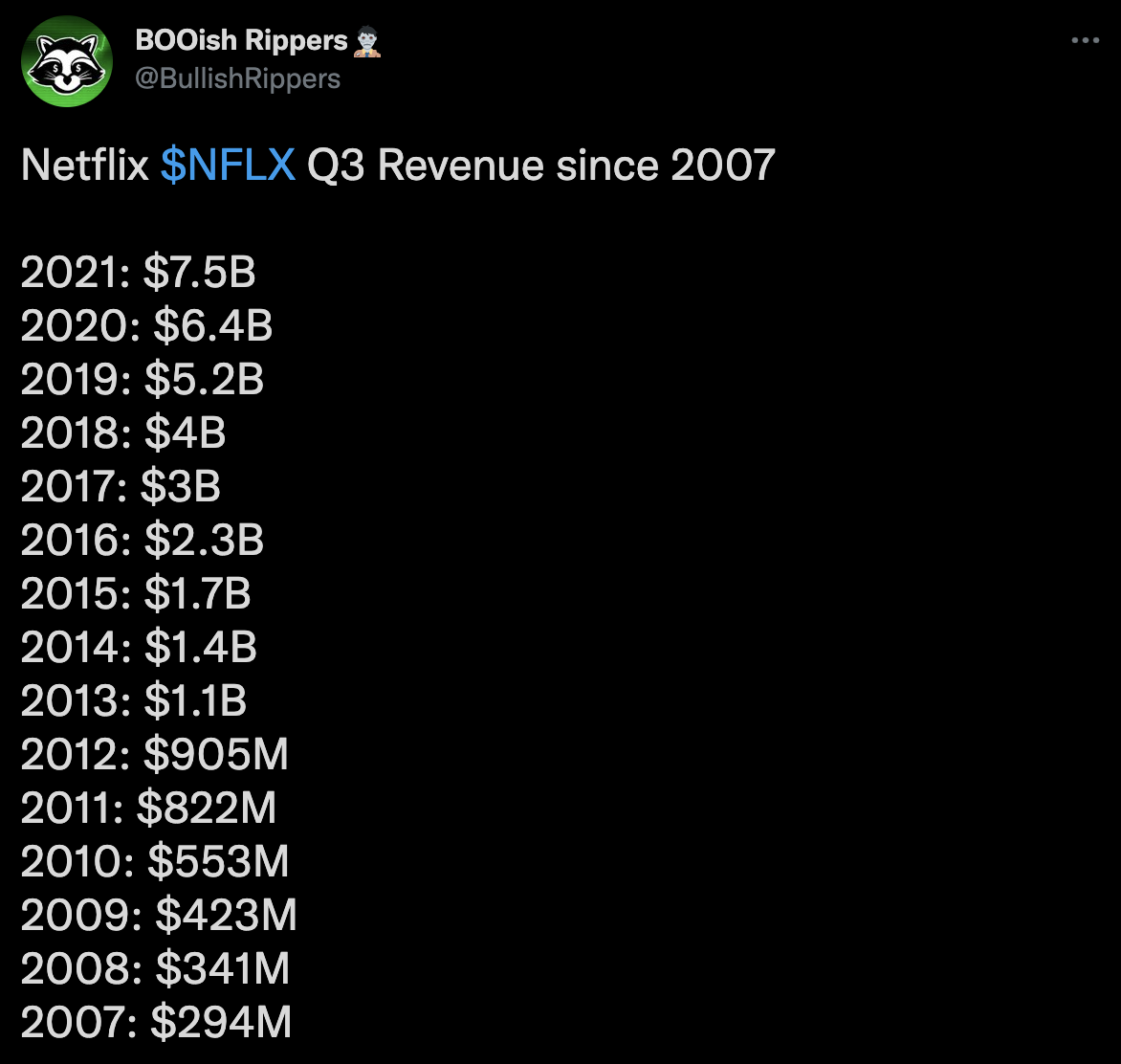 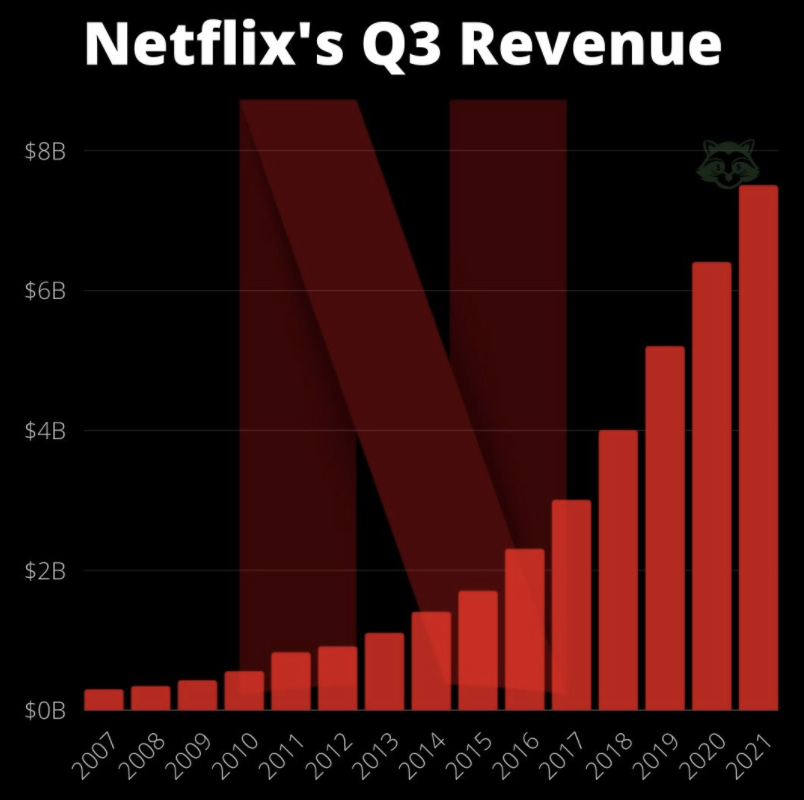 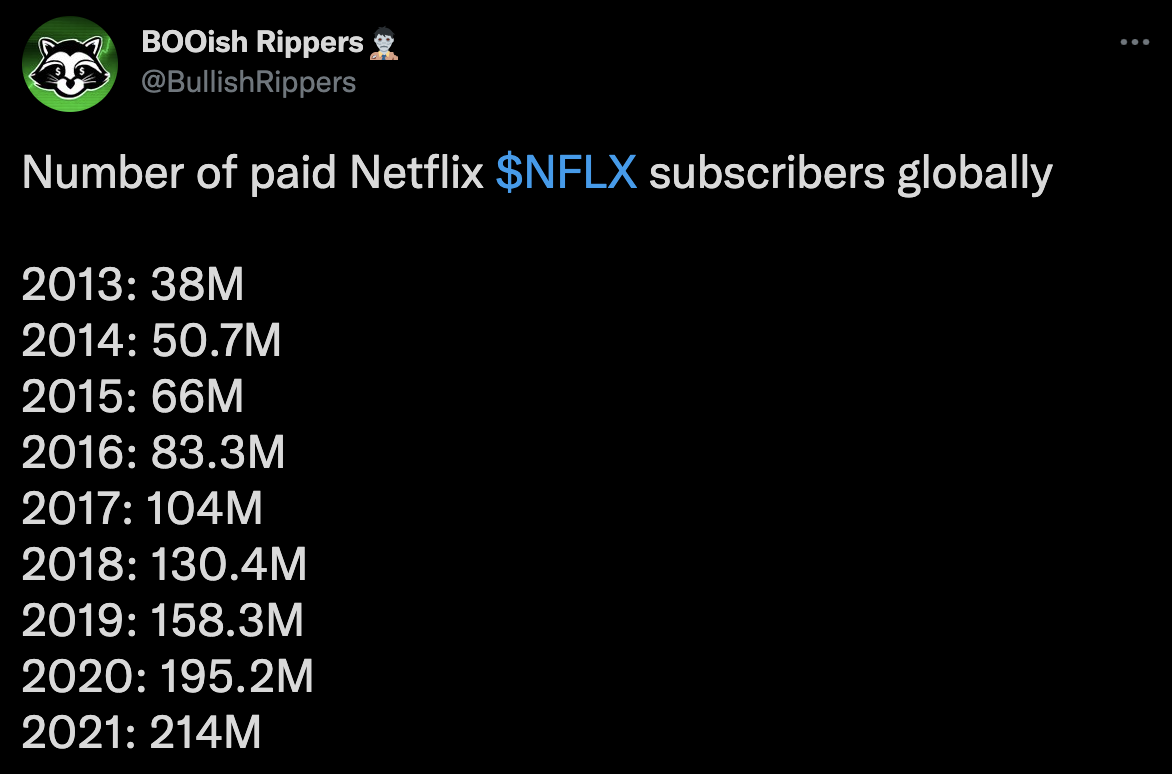 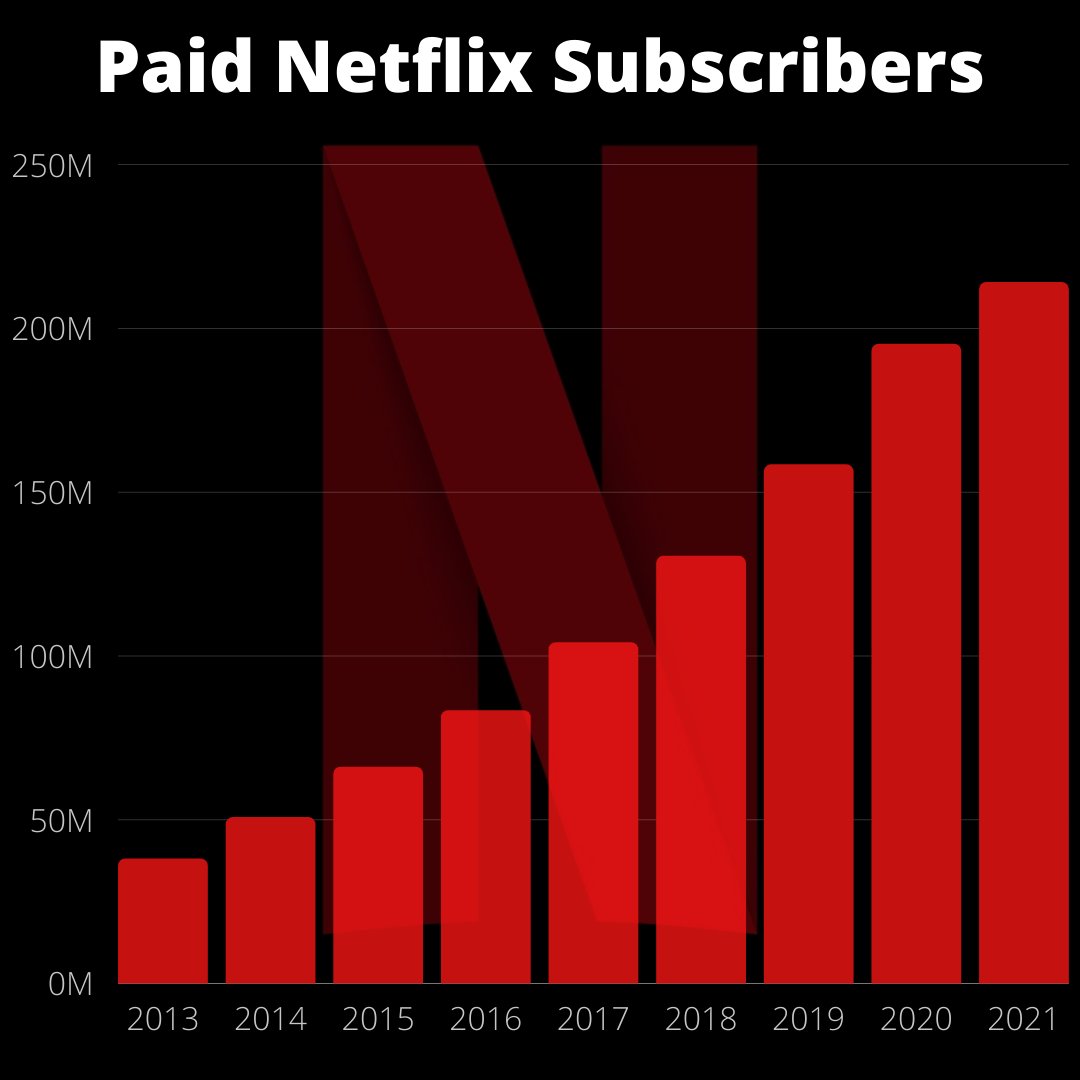 Subscriber growth for the year is tracking below previous ones, but it’s still nothing to scoff at. Netflix has now added a total of 9.9 million net new subscribers so far in 2021. 1.5 million of those subscribers came in Q2, while 4 million of those came in Q1. Netflix can only be expected to have a slow down after last years’ COVID pull forward of demand, where they added a record 37 million paid members. 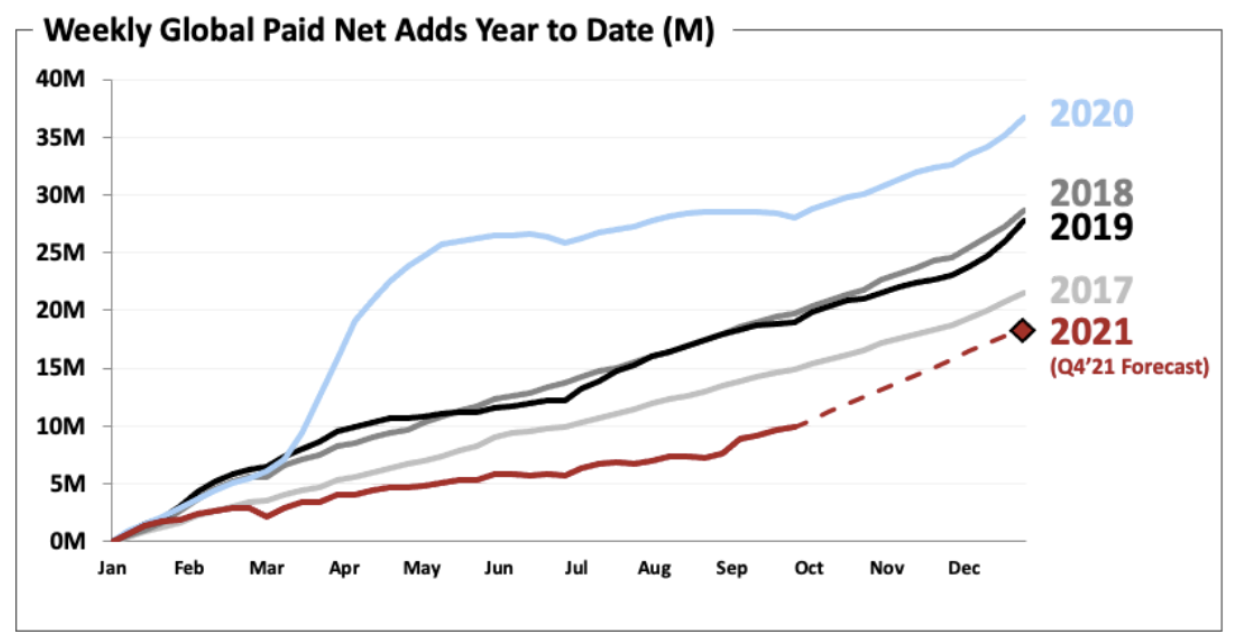 Netflix saw a pick up to subscriber growth toward the end of the quarter, as the company had guided for. This was attributed to them getting into their strong end-of-year content schedule along with seasonal trends.

Customer churn was down from the same periods in 2019 and 2020. That — combined with watch time per member increasing from 2019 levels — point to strong increasing levels of satisfaction from Netflix subscribers.

There are a couple driving factors to that satisfaction — a main one being content. They’ve been putting out more and more high quality projects that target different audiences. Netflix has been investing big in their international shows, now making content in 45 countries.

These shows are pivotal for the markets they’re targeting. For example, “The Chestnut Man” — which was made for the Danish market — is expected to be viewed by more than two-thirds of all Danish subscribers in its first four weeks. These shows can also drive significant growth, as shown by the South Korean targeted “Squid Game.”

Analysis | Netflix Is Winning Streaming’s Own ‘Squid Game’
The service is outplaying its rivals in the contest of who can keep the most subscribers from canceling.
www.washingtonpost.com

Netflix has advanced significantly with its content, but they still has some ways to go when it comes to the total experience. Look to Disney — they come out with amazing content and then have an entire ecosystem built around it to extend the value of that show. From merch, to video games, to theme parks, Disney is an expert at this. Netflix has some catching up to do.

Netflix is in the process of launching and growing their consumer product/merch business. They’ve already announced a partnership with Walmart to sell a limited amount of merch from their shows. This is just the start of what should be a big focus for the company.

They believe it's something that can be big and is certainly within their wheelhouse. With that in mind, management did say even if this segment is successful, they don’t believe it will have a meaningful impact on revenue and margins against the core business. The point of doing it is to increase engagement, affinity with the brands, and ultimately virality.

Netflix is in the very early stages of video games, having launched some new games in select markets. Management said they’re currently just testing that all their systems work.

Netflix plans to learn their way through the entire process, testing a bunch of different game types to see what works and what doesn’t. This leads me to believe the first couple of games will be truly terrible, but over time I wouldn't bet against them.

They made it clear that there are no current plans to monetize video games in any format. No advertisements, no extra subscription costs and no in-app purchases. The goal is solely to increase engagement and perceived value of the overall Netflix subscription and not make additional income… at least for now.

Netflix also acquired game studio Night School during the quarter. As all things with Netflix in video games, its still way too early to take away anything major from this. They did say that Night School’s focus on exploring story and narrative as the central game mechanic and the potential overlaps with the core business is what makes them really excited about the buy.

It's first important to realize what Netflix considers competition. It's not just the other streaming names or even cable TV. Netflix is ultimately in a fight for eyeballs. Anything people spend time on while online, Netflix considered competitions.

From social media to video games, Netflix is competing against them all. Just to prove they do compete with some of these type of companies, Netflix saw engagement increase by 14% recently when Facebook experienced its global outage. 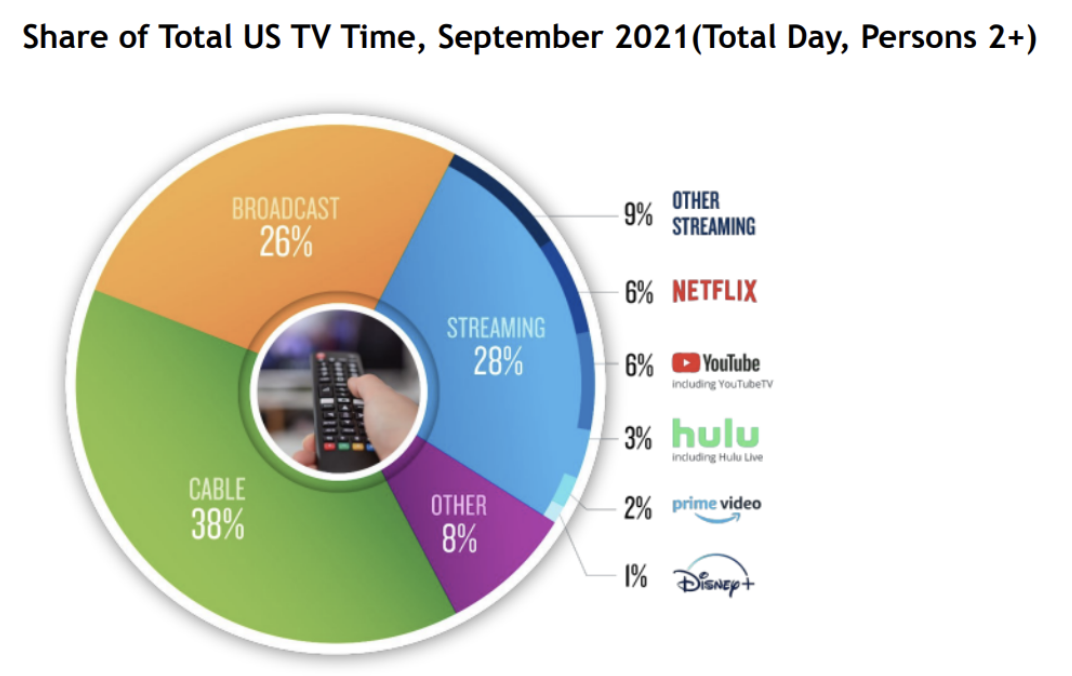 Total break down from September (via Nielsen)

Looking specifically at total TV time, Netflix had 6% of the market in the US during September. Competition is really fierce, and Netflix is spending big to stay ahead. However, It’s important to realize this isn’t a zero-sum game. People can — and certainly do — sign up for multiple streaming services.

With that in mind, most of us can only watch one thing at a time... and we all only have 24 hours in the day and seven days a week.

📊 Netflix by the Numbers

Netflix only grew their US and Canada subscribers by 70,000, but that's better than the 430,000 decrease they saw last month. Stagnation of subscriber growth in your largest and most profitable market is never a good thing. However, Netflix has shown strong pricing power, raising its prices by 10% YoY in region. 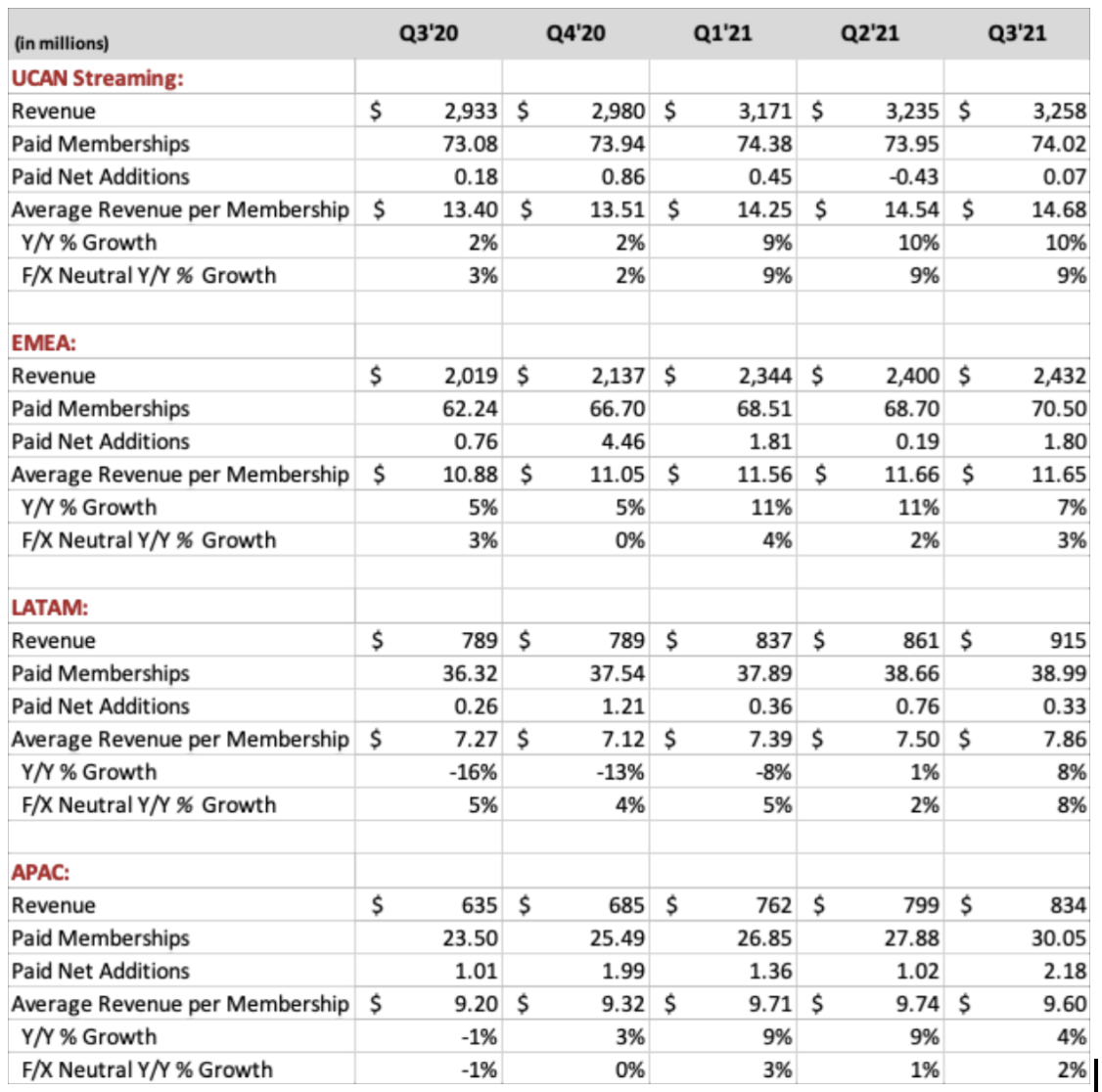 Squid Game: It is literally Netflix’s biggest show ever. “Squid Game” was popular in every market they operate in, with viewing numbers looking similar to how language specific shows perform within their home country.

“Squid Game” was viewed by 142 million households globally in its first four weeks after release, the previous record was “Bridgerton: Season 1” with 82 million households. Netflix estimates the series will bring in $900 million of value for the company after spending only $21.4 million to make the project.

Number of Viewers Over First Four Weeks by Series:

Number of Viewers Over First Four Weeks by Movies:

Netflix also said it will no longer report on how many accounts watch specific titles, switching to sharing the total hours watched instead.

Content Spend: Netflix spent $4.7 billion on content during the quarter, up 77.4% YoY ($3 billion). This brings their total content spend for the year up to $12.7 billion. During the quarter, they also agreed to spend $686 million in order to acquire the rights to the Roald Dahl company. Roald Dahl was behind famous stories such as "Charlie and the Chocolate Factory," "Matilda," and much more.

Netflix forecasts paid net subscriber additions to come in at 8.5 million next quarter, which would bring their 2021 total up to 18.4 million new subs.

They had previously guided for $17 billion of total content spend for the year. Taking what they’ve already spent, that leaves about $4.3 billion left for Q4. The expected weaker operating margin in Q4 was attributed to the large amount of content set to be released during the quarter.

All eyes should be on Netflix’s Q4 releases. Some of their biggest bets to date will be airing next quarter and into early 2022. I was shocked to see the amount of A-list celebrities starring in movies set to release on Netflix next quarter. You’d hope to see at least one of these names grabbing mainstream attention. I'm personally most excited for The Witcher and Tiger King.

I'm conflicted on what to say about the stock. I came in a little more pessimistic; however, I was pushed closer to being a fan of the stock after hearing them lay out the potential for future growth. It's a really high bar for Netflix because I compare them to other streaming names, not the entire market. Compared to the entire market, Netflix is something I could easily get behind. When I compare it to other names in the industry, I’m less confident in saying I believe Netflix will outperform.

For a while it was just Netflix, but unlike some other industries — the competition is actually here now. Streaming fans have a lot of choices now, but this also gives us stock pickers a choice for how to be exposed to the streaming market. I'm a big fan of the overall sector, and I would actually support buying into an ETF to get exposure. There are a couple different names that a quick google search will bring you to. One of these is Roundhill's $SUBZ ETF, which actually has Netflix as its second largest holding.

If you made me choose just one streaming name to buy, I would still go elsewhere. However, I'm much closer to being able to get behind Netflix than I was before. Netflix still believes it has a long growth runway ahead of it, and I really don’t disagree. I just think other names might have a slightly larger opportunity.

There are a couple big bets on small companies you can make, but that’s not really my style. I like to have my portfolio in larger, more developed names that still have growth potential ahead of them.

And as an honorable mention, here's one of my favorite "Squid Game" memes:!

We all know the right answer but sometimes it's really difficult 😂

Do you check your portfolio too much?

That's all for Bullish Rippers this week! Let us know your thoughts and make sure to stay up-to-date on all the stocks ripping and dipping over on our Twitter. Stay bullish and we'll see you all in the next one 🔥