And what company relinquished them from this title? 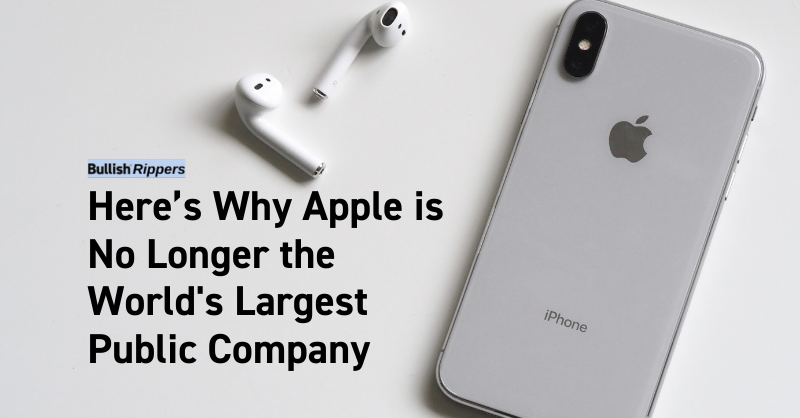 Apple reported earnings this Thursday after the market close. In the aftermath, Apple fell below Microsoft in market cap, relinquishing its title as the world's largest public company. 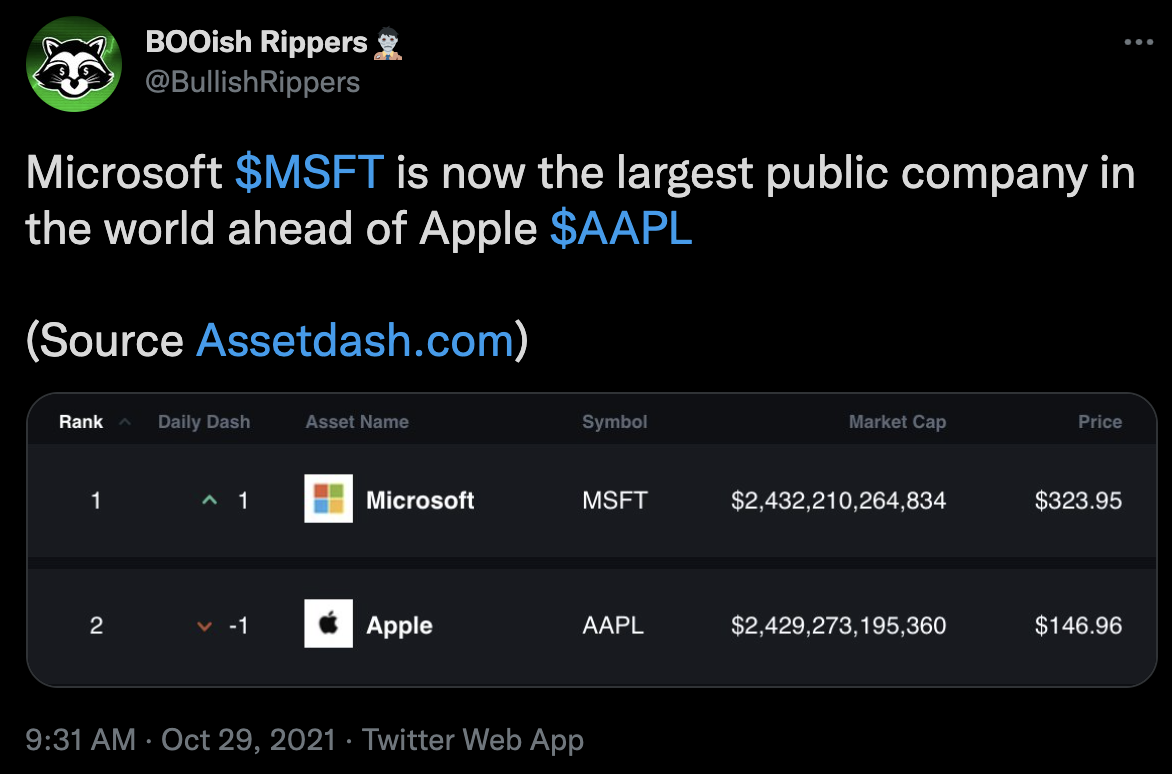 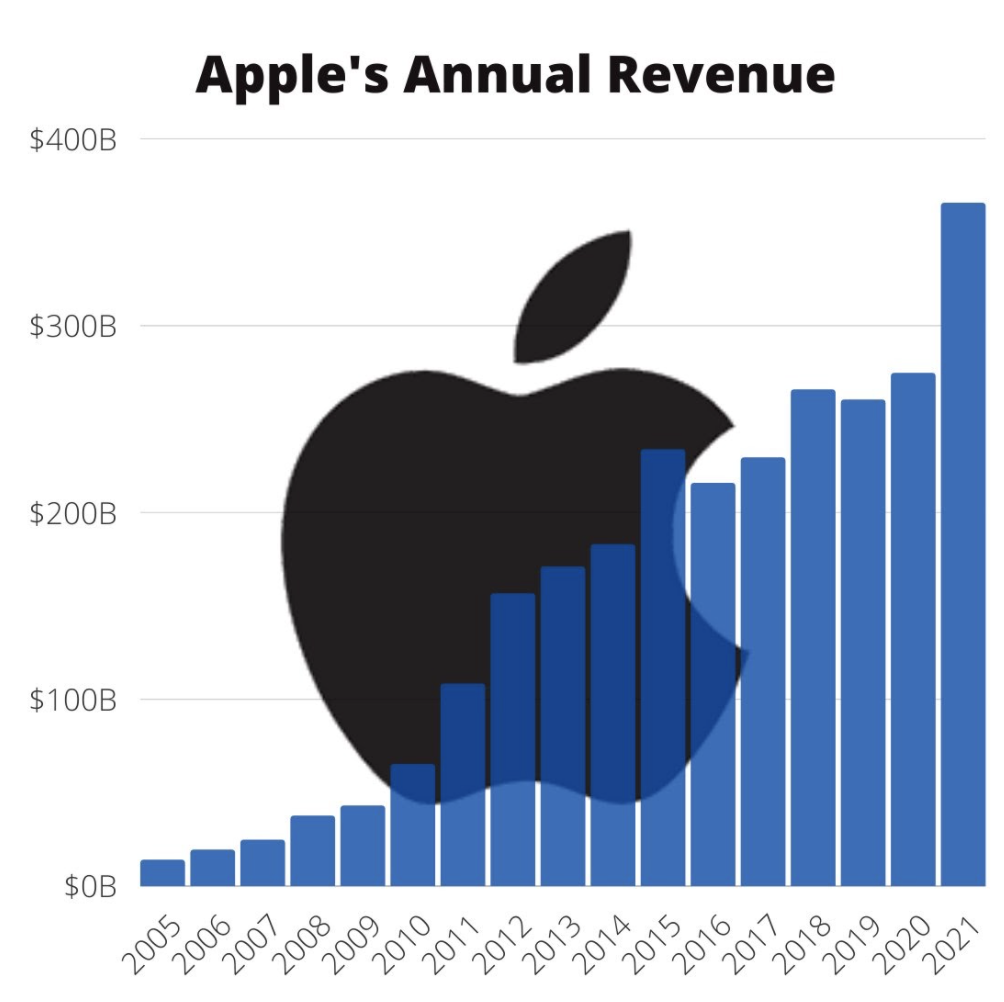 This was Apple’s fiscal year Q4, meaning they also reported their full year 2021 numbers. Apple reported revenue of $365.8 billion and net income of $94.7 billion for 2021 — both new annual records.

Supply chain problems were the main issue Apple faced during the quarter. Supply chain constraints cost Apple more than they were expecting this quarter — $6 billion to be exact. There were a couple factors causing these problems, including the ongoing chip shortage, COVID-forced lockdowns in South East Asia and “significantly” higher shipping costs. Apple didn’t specifically talk about it, but looking across the industry and the economy, another factor causing these constraints is the increased time it takes to ship goods.

Port of Los Angeles going 24/7 to help relieve U.S. supply chain backup, White House says
Administration officials say that will nearly double the number of hours ships can unload their containers at one of the nation's busiest ports.
www.cbsnews.com

Apple CEO Tim Cook did say the COVID situation in South East Asia has improved significantly heading into the next quarter. Apple expects supply chain constraints for this upcoming quarter to be caused predominantly by the ongoing chip shortage. 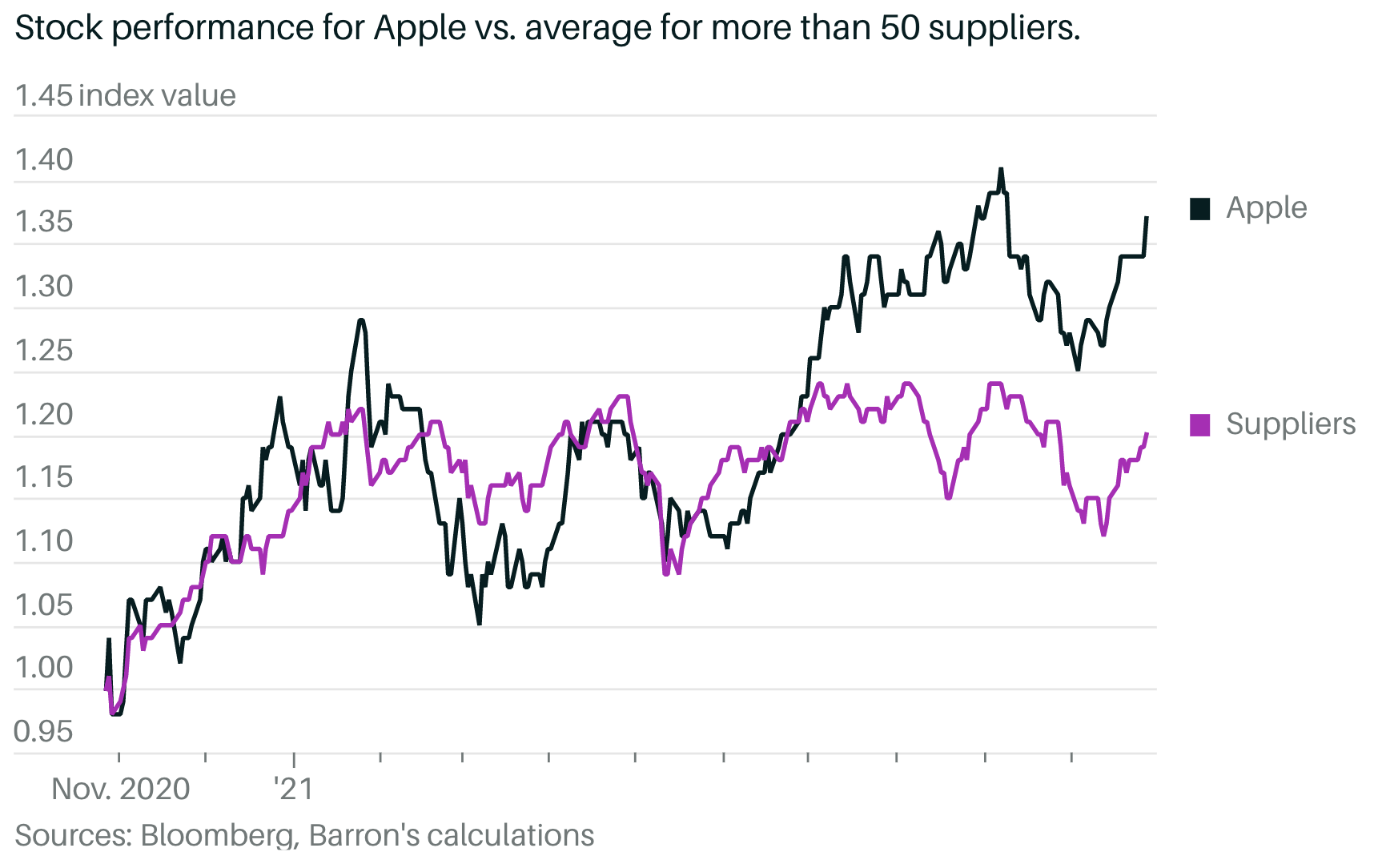 Demand for Apple is still as strong as ever. On the conference call, Tim Cook called demand “robust” multiple times. There are a couple reasons for this strong demand, including high customer satisfaction and the upgrade to 5G. Front and center this quarter was Apple’s strong pipeline of products, with multiple new ones being announced at two product launches.

📊 Apple by the Numbers

If you saw Apple’s price move and were expecting these numbers to be bad… Well, think again! In a vacuum, these numbers are great. In the Americas, Apple grew its largest region by 20%. And their largest segment, the iPhone, grew revenues by 47% year-over-year (YoY).

While their last five quarters for Mac were its best quarters ever for the category, Apple set new annual revenue records across every one of its geographic regions and product segments — up at least 20% over fiscal 2020.

Apple has had some macro trends going for them. For example, COVID forced people closer to their phones and computers. Another trend that’s helping their numbers is the upgrade to 5G. 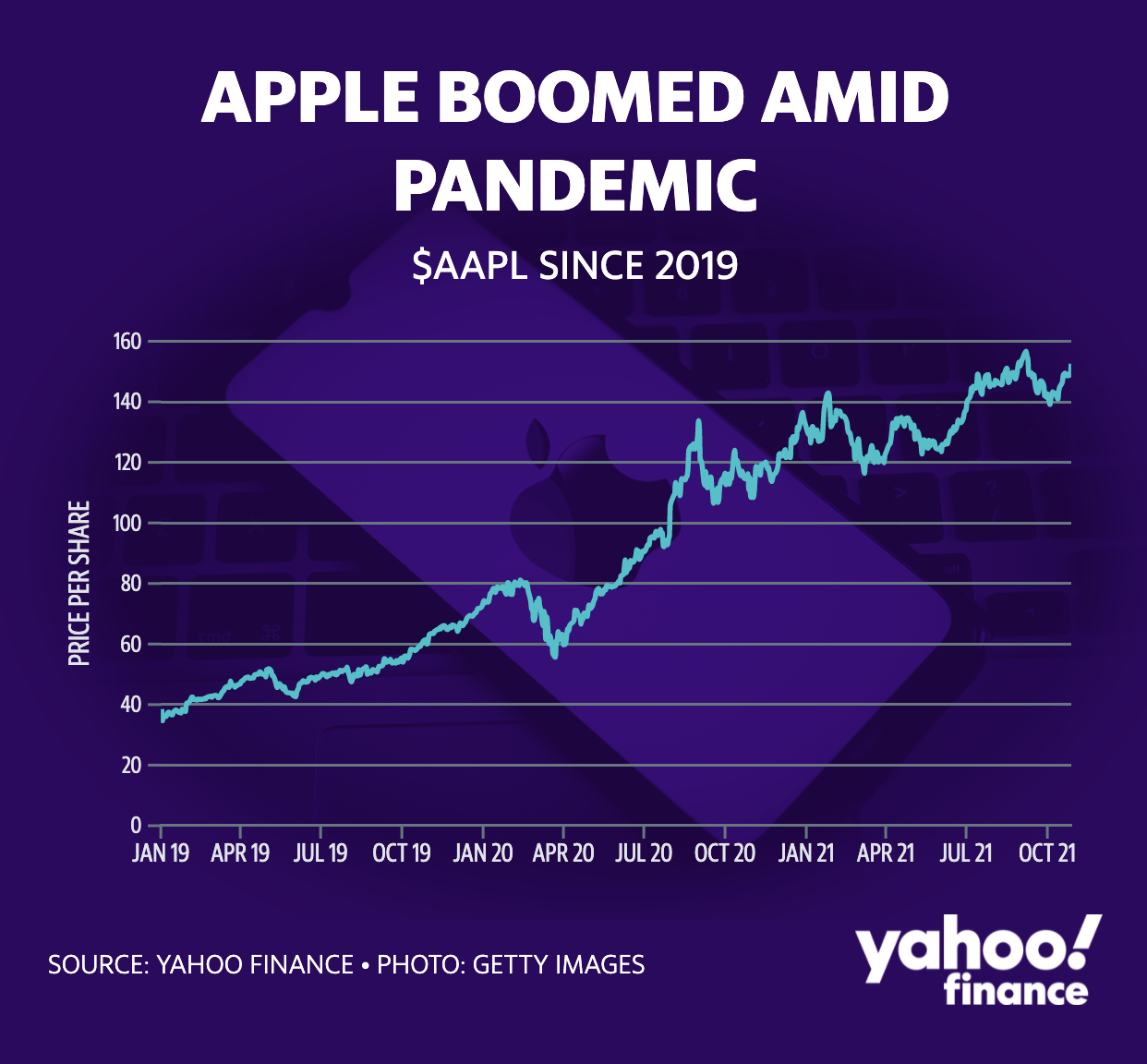 Tim Cook said he thinks “5G has provided a once in a decade kind of upgrade potential, and it’s a multiyear kind of thing. It’s not a one year and done.”

Apple still gets 78.1% of its revenues from products and hardware, while bringing in the remaining 21.9% from services. Unexpectedly, Apple’s percentage of revenue from hardware is actually up from last year’s Q4, which came in at 77.5% of total revenue.

Along with the quarterly dividend, Apple also spent $20 billion to buy back 137 million shares of common stock during the quarter as a part of its ongoing share buyback position.

Given the current macro environment, Apple chose not to give forward revenue guidance. They instead chose to give some “directional insights.”

If COVID related impacts don't worsen, Apple projects “solid” YoY growth and is still expecting a record December quarter. They expect each of their product categories to grow YoY next quarter — besides iPad — which Apple blamed on “supply constraints.''

Apple expects to see a deceleration in their growth rate in services but still expects growth to remain strong. They also estimated that next quarter supply constraints will cost the company more than the $6 billion it cost them this quarter.

Overall, it was a good quarter from Apple. The problem is with Apple’s recent performance and valuation they need great.

Let's say a “good” quarter is equal to getting a B to B+ in school. Well, a B is great for a D student. But for a perennial A+ student like Apple, a B+ isn't good enough. That — combined with the recent performance in the stock — sent it lower.

It’s hard to give objective opinions on my largest holding. As someone in that position with it as my largest holding, this quarter didn't change anything for me. I have no plans to buy or sell soon, and I'm still confident holding my position for the long term.

I'll be watching closely for any guidance on how iPhone 13 sales are panning out. The new iPhones were only released in September, so there wasn’t much of an effect on this quarter.  We should get some more color around the strength of this iPhone cycle next quarter.

Supply chain problems are also a key thing to watch here. Apple set the expectations that supply chain problems will cost them more this quarter than last, so they have some leeway. But if the costs are significantly higher than $6 billion, we could see a similar price action move to how this earnings went.

That's all for Bullish Rippers this week! Let us know your thoughts and make sure to stay up-to-date on all the stocks ripping and dipping over on our Twitter. Stay bullish and we'll see you all in the next one 🔥