After Robinhood's IPO, What's Next for the Volatile Stock?

And should you invest in $HOOD? 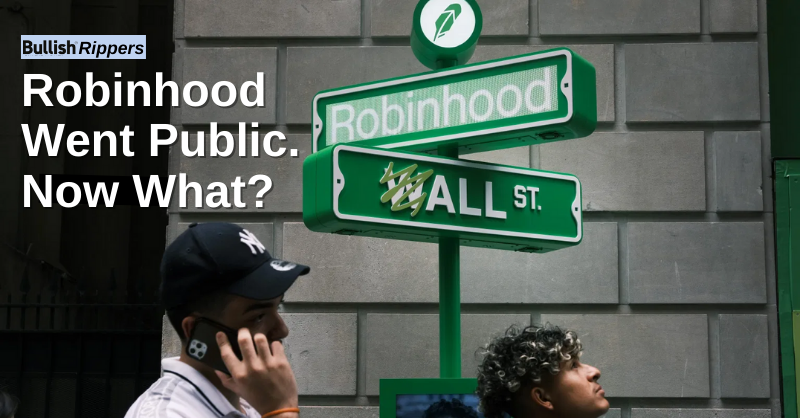 If you care about stocks, just opened a Robinhood account, or are new to the world of investing — the Bullish Rippers Newsletter is for you! Every week, we cover the biggest stocks dominating the conversation from Wall Street to FinTwit. Think of us as your go-to-guide to the stocks and crypto that are ripping.... and dipping. Ultimately, our goal is to help you try and identify opportunities and actions in the marketplace.

What do Snoop Dogg, Jared Leto, NAS and Howard Lindzon all have in common? They were all early investors in Robinhood. With Robinhood recently going public, these early investors have made A LOT of money!

It makes me think: Will we see similar results in 10 years from now for the everyday investor that bought into the Robinhood IPO? 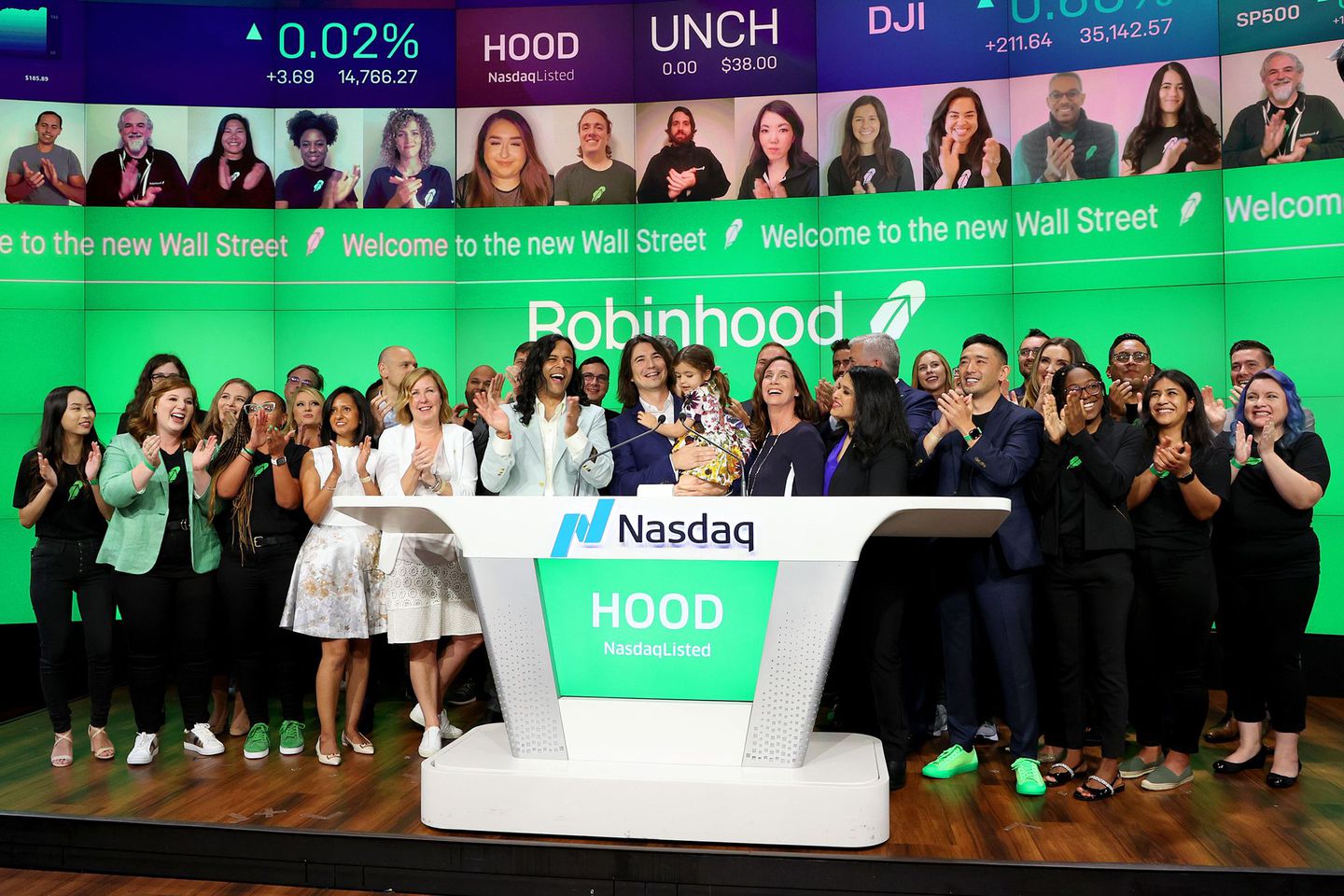 Image via The Boston Globe

Robinhood started in 2013 by co-founders Vlad Tenev and Baiju Bhatt. Previous to Robinhood, the pair had worked together starting two finance companies that sold trade software to hedge funds. Through this business, they saw that Wall Street firms paid almost nothing to trade. Meanwhile, brokerages were charging retail customers a commission on every trade. The pair thought there was an opportunity to disrupt and democratize the brokerage space. Thus, Robinhood was born.

The co-founders had 75 doors closed on their faces by venture capital firms before raising the $3 million of seed money needed to launch the brokerage. Shoutout to the investors who saw the founders’ vision when they had no product, no financial approval, and no users on a waitlist.

Robinhood has grown very quickly since that time. Their number of users grew from 500,000 in 2014 to 13 million in 2020. During that time period, their user base grew by 72% per year on average. Riding the wave of the whole GameStop saga, Robinhood would add 5 million new accounts in Q1 2021 alone — bringing its total funded accounts to 18 million. Robinhood reported its Q2 earnings on August 18th showing even more growth. 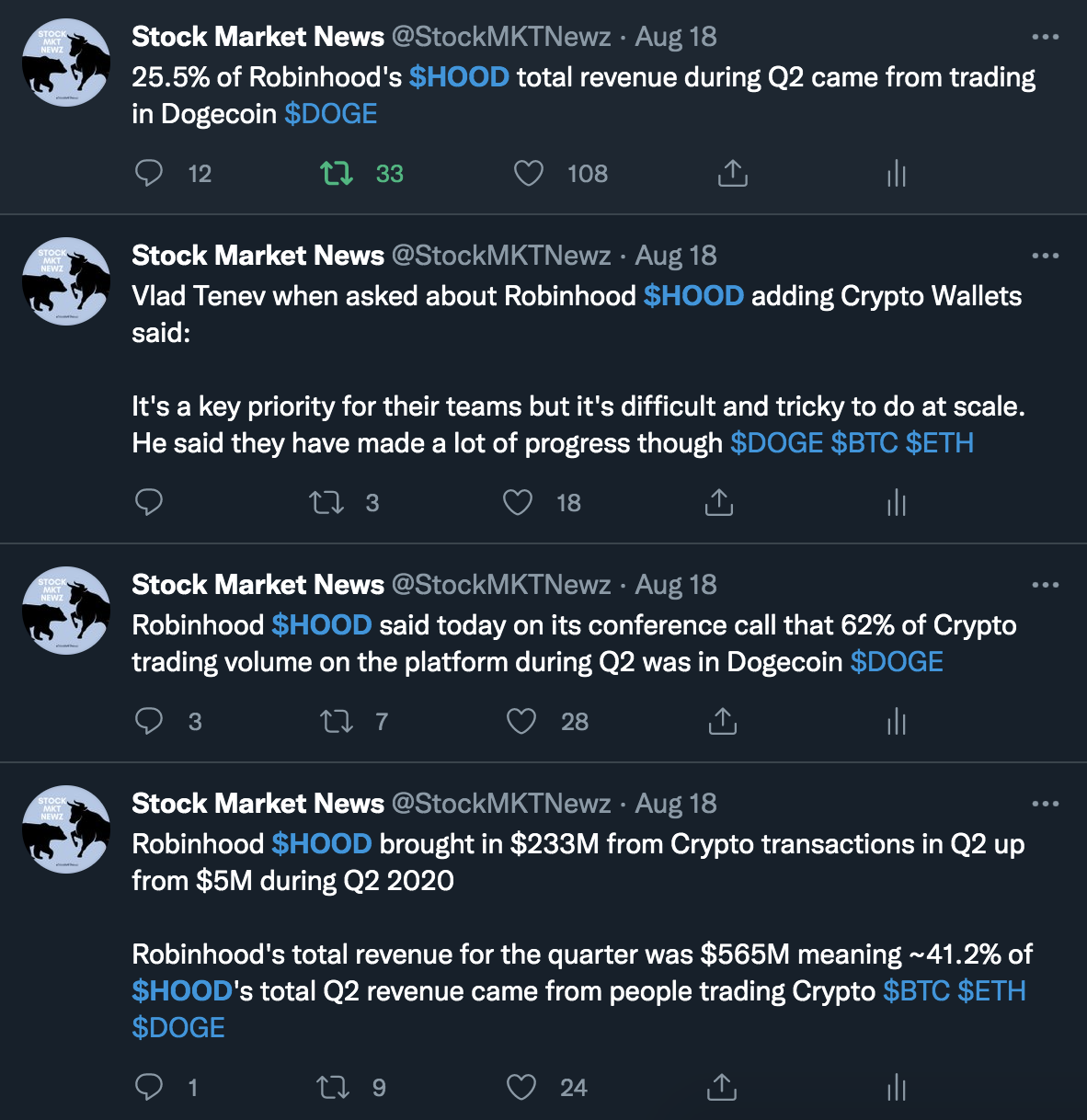 Robinhood has been one of the most watched and talked about stocks since it went public on July 29 — selling 52.4 million shares at $38 per share and valuing the company at about $32 billion.

However, Robinhood got hit with a double whammy of potentially bad news on August 30:

If this were to happen, it would be a big blow to Robinhood, which generated 81% of its revenue in Q1 2021 from PFOF.

📊 Robinhood by the Numbers

🗣 What the Experts Are Saying

Is Robinhood worth all the drama? Well, asking whether you should care or buy are two separate things. So, should you care? Yes! Robinhood is a fun stock to watch … endless amounts of drama, with extremely entrenched groups on both sides.

On one side you have people like Howard Lindzon and Jim Cramer that rightfully point to all the good that Robinhood has done and the potential it has. Democratized investing and allowing anyone to get into the market is a core value of Robinhood. It's literally the first sentence of their mission statement!

The Robinhood IPO - Howard Lindzon
My partner Tom and I invested $100,000 out of our first $6 million Social Leverage fund in the seed round of Robinhood back in 2013. Charlie found this quote from me from an int...
howardlindzon.com

Robinhood has done an amazing job getting new people into the market, mainly Millennial and Gen Z investors. If Robinhood can continue innovating these young investors have the potential to stick with the brokerage for decades.

On the other side you have a healthy group of investors that love to point out its flaws. From Wall Street to WallStreetBets, there are plenty of people from a variety of backgrounds that are against Robinhood. There aren’t many stocks that have generated the level of hatred Robinhood has from some retail investors. While Robinhood has had a lot of controversies in the past, they created their most fervent haters in January of this year when they restricted buying on stocks such as GameStop, AMC, and Blackberry.  From Dave Portnoy to Unusual_Whales, you will have no problem finding large accounts against Robinhood on Twitter.

I will not buy $hood out of principle.  I can’t contribute to the dishonest getting filthy rich.

On Jan 28th, it was when numerous brokers restricted $GME, $AMC, $KOSS, $NAKD, $BBBY and many more purchases.

It started a movement.

And the game has just started.

Power to the players.

The people against Robinhood will often criticize them for "gamify investing." This gamification could push young investors to make more emotional trades and more trades in general. As mentioned earlier, Robinhood makes the majority of its money from selling trades through PFOF.

These people are also quick to point to the small account size of the Robinhood user compared to other brokers. Robinhood’s most recent earnings showed the company had 22.5 million net cumulative funded accounts, with $102 billion assets under custody. This gives them an average account size of $4533.33.

Looking specifically at the two stories from this week, I’m not sure either will really turn out to be a big deal. PayPal getting into the broker space makes sense for them. With that in mind, it isn't likely to disrupt Robinhood’s business in the long-term and certainly won't anytime soon.

This all just feels like just another competitor in a space Robinhood has shown it has the ability to compete, grow, and win in. The much bigger of the two stories is the possibility of Robinhood losing its majority revenue source in Payment for Order Flow. I don’t think this seems likely to happen at least any time soon. This tends to be the most common thought online, from people such as Interactive Brokers founder Thomas Peterffy to Bloomberg.

This practice has become an industry standard, and there isn't just a switch you can flip to turn it off without short term consequences. We don't want to get too technical, but this change would need to be planned out very carefully so as to not cause problems with liquidity. Although I don't think these stories will amount to anything, they do point to another risk in holding Robinhood stock … Headline Risk!

Now for the very important question: Should you buy into the stock?

For the long term investor, I wouldn’t be sprinting to get into this name at current levels. I think Robinhood has a solid chance to go back below its IPO price of $38 at some point in the future. Although there is a lot of potential for Robinhood to grow into, it could take some time for this to happen.

If you plan to hold for over 5 years and really believe in the company, you’re fine to hold. Just be ready for some serious volatility ahead… I wouldn’t be surprised to see this stock down 50% or up 50% next week.

🤔 What's Next for Robinhood?

A lot of Robinhood’s problems come from what I think is their biggest issue … PR! Robinhood is doing a lot of things to help individual investors but falls miles short in explaining what they’re doing to help.  It seems like Robinhood is always 1 step behind dealing with problems and communicating it to the public and this has caused them to become a hated brand. Robinhood needs to fix this! They need to take PR more seriously and bulk up their efforts in the space to avoid staying a hated brand.

One major thing with Robinhood that really concerns me is their heavy reliance on PFOF for their revenues. If trading activity slows at all Robinhood will feel the pain! They do have features like their Robinhood Gold subscription and have hinted at the possibility of becoming a market maker in order to reduce its reliance on payment for order flow.